Advent of Code (Wikipedia, link) is an annual event that releases a programming puzzle every day from December 1 to December 25. It’s a great chance to learn a new language or practice your skills. 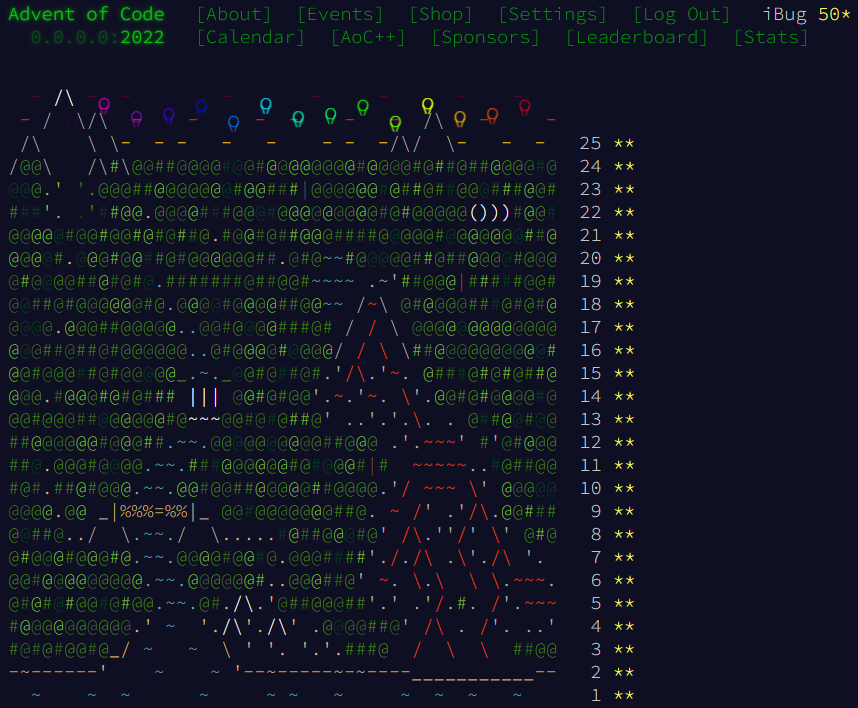 Considering that all the puzzles are designed to be lightweight, meaning that if implemented correctly, they’re solvable in no more than a few seconds with a reasonably small memory footprint, I picked Go as my language of choice. Go has been my preference over Python for a while, for being compiled into machine code and thus more performant, and a decent set of standard libraries.

The first 10 puzzles are very easy and doesn’t even require special knowledge. They’re practically just text processing and simulation, so there aren’t many comments to be made.

Starting from Day 11, the puzzles become more interesting. Some math or data structures are required to solve them.

Finally, a magic trick that I discovered from Reddit for Day 15 part 2: Observing that the only uncovered space must be adjacent to multiple covered areas, examining the intersections of the edges of the beacons’ coverage areas produces a tiny search space. While it’s intuitive to build upon part 1’s solution, this discovery leads to a lightspeed solution.

In fact, rushing to the puzzles was not even the first thing. I did not come across the event until my friend taoky recommended it to me. He was already halfway through the puzzles (his repository) and had set himself a set of rules, including one where “all solutions should take reasonable time and memory usage”. We discussed various methods to measure the time and memory usage, when he set it forth that it was not easy to add measurements to every single program.

Based on our discussion, I decided I would leave room for measurements when designing the project. So the first decision was to reuse code as much as possible within the project. For example, I’d like all solutions to share the same “peripherals” like the main function. This way if I want to add an extra feasure like performance measurement, I only need to do it once.

The next decision was to compile solutions for all puzzles into a single binary. Go is not known for producing small binaries due to static linking, so having separate binaries for each solutions implies a non-trivial amount of unnecessary disk space. Another reason is that due to Go’s package design, it’s more complex to selectively compile individual files than to compile all files together (the “package”). With a go.mod file present, go build conveniently compiles all files in the same directory.

With that in mind, here’s the first commit of the project. In addition to the code itself, two more design ideas can be seen:

Now with the project structure in place, I started working on the solutions. The second commit added my solution for Day 1 part 1, and it followed the designed structure like this:

While the first few days’ solutions were pretty ordinary, my design began to prosper when I started working on Day 5 part 2. The only difference between part 1 and part 2 is whether moving a stack of crates maintains or reverses their order. Compared to the common one-source-file-per-solution design, I can now reuse almost the whole function from part 1, and abstract the difference into a function parameter. This is how day5.go looks like after adding part 2:

For Day 6, the benefit is even more prominent:

Had I not designed the project this way, I would have to duplicate the whole function for part 2 only to change a single parameter, making things much more error-prone.

Given the project design above, adding measurements is much simpler than it would have been if I had adopted the one-source-file-per-solution layout. It boils down to just two things:

Measuring memory usage is a bit more complicated. Go’s memory profiling doesn’t provide a simple “max usage in this session” metric, so I have to resort to OS-specific methods. On Linux, for the time being, I use getrusage(2) with RUSAGE_SELF, as two other known methods (using Cgroup and polling /proc/self/status) either require forking an extra process or add significant overhead and engineering complexity.

Now the program can produce a short summary of the performance when running a solution:

There’s one caveat here: The “Max RSS” value returned by getrsage(2) is the peak memory usage during the whole program’s lifetime, starting from when it’s forked from the parent process, when it inherits all mapped pages (resident set). Using an interactive Bash gives a minimum value of around 7.7 MiB, while using sh -c './adventofcode -p', adding a level indirection, reduces the starting size to 1.2 MiB.

Up until now, the project has a flat layout with no subdirectories, and all Go source files start with package main. This is because I did not plan to support multiple years at the beginning. However, as I started working on puzzles from 2021, I realized that I need a better structure to support multiple years without worrying about namespace issues, like both years having a Solution1_1 function.

Moving each year’s solutions into a subdirectory is a natural choice. However, go build doesn’t pick up subdirectories by default, so I have to find a way to make it work. There are also some minor name searching issues, like RegisterSolution being defined in main.go but used in every solution file.

After a bit of trial-and-error, I carried out the following changes:

With this in place, I can now add solutions for 2021 without worrying about name conflicts. For convenience, I also added auto-searching for input files in the current directory, so I can just run ./adventofcode 2021/1-1 to run the solution for Day 1 part 1 of 2021.

At this point, the project has successfully deviated from a collection of solutions to small-but-interesting puzzles, and has become more like a general-purpose tool for this kind of events. Nevertheless, it’s a fun journey as a software engineering practice, in addition to solving the puzzles themselves.

Looking at these paths I’ve taken, it is manifest that the initial decisions in the right direction are highly contributory in easing the development process, particularly when I’m coming back later to add a new global feature. This experience once again emphasizes the importance and advantages of having a clear idea of the project before starting to write code, as well as keeping the code in an extensible and maintainable fashion.