I’ll go straight to the solution (keep in mind that it’s considerably primitive, so use at your own risk) with code attached below. It’s a Tampermonkey userscript.

I was searching for some resources when I came across a WordPress site. I had both ABP and uBO installed, and the website flashed blood red. So it was an ad blocker detector, easy peasy, and I hit Ctrl-Shift-I, only to find that it didn’t work. I tried F12 and found it was blocked, too, so there must be other methods I could resort too.

If I can’t open Dev Tools with the page showing, I can always have it open before the page loads. I had a sense this would be a tough opponent, so I opened an incognito window, enabled ad blocker extensions, opened Dev Tools, and navigated to the page.

Whoa, it’s paused with the debugger, and when I go to the Elements tab, I found that the script had removed the whole DOM, leaving only the <html> tag behind:

That was OUTRAGEOUS! It’s the most offensive script I’ve seen. I must track it down and counter it.

Looking at the Network tab, there are so many scripts that I probably can’t inspect them one-by-one.

When I reload the page, I found that my whole Chrome went unresponsive, and I had to stop it from Task Manager. What a job they’ve done!

One (and the only one so far) key behavior is its removal of the whole DOM, so if I could track that change, I could very accurately locate the offending script.

I opened Chrome in incognito mode again, and opened Dev Tools. I need to add a breakpoint on change to the root element, and I have to add the watcher after opening the page, so the first thing to do is to add a breakpoint at page load. I navigated to the Sources tab, under Event Listener Breakpoints, I checked load: 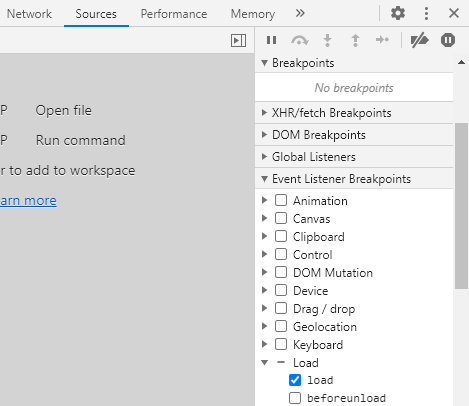 Then I navigated to the page, and an innocent script hit the breakpoint. 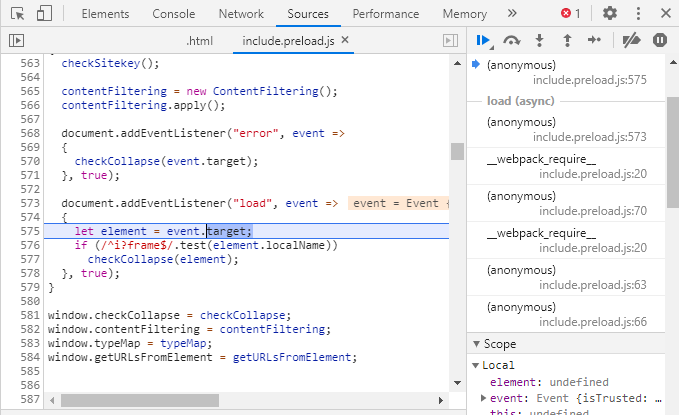 That wasn’t too much of a problem, as I could then switch to the Elements tab and add a breakpoint onto the <html> element: 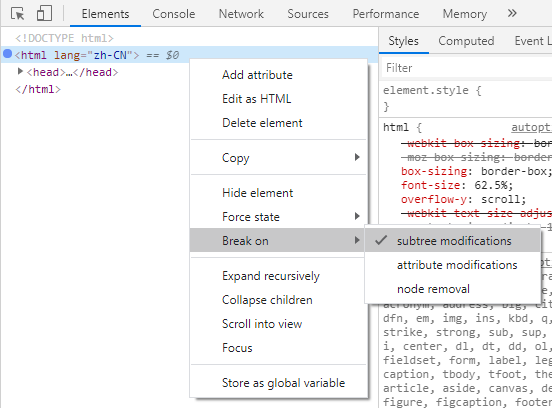 The next task would be a bit boring, to keep on continuing the debugger while keeping an eye on what’s running.

The same innocent script, along with jQuery, showed up around 20 times, before the first suspicious script poped up:

It was named ads.min.js and was pretty short, as shown below (formatted):

So I let it continue.

It quickly became a tedious task, stepping through all those jQuery and analytics script with nothing interesting.

Recalling that the offending script would remove both <head> and <body> elements, I changed the breakpoint to them: 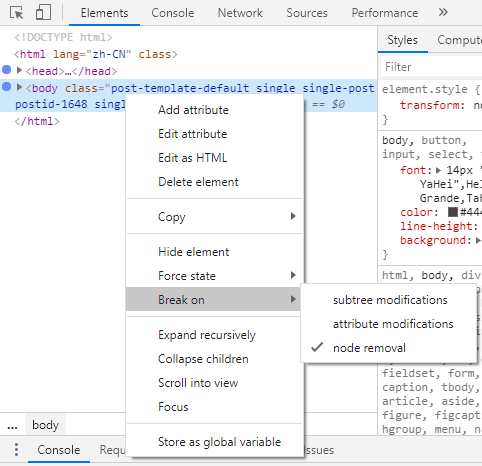 It turned out that I did the right thing. Another suspicious script showed up very quickly:

It’s minified and had a jumbled file name. Scrolling the line to the beginning shows a heavy hint that it’s the one I was looking for: 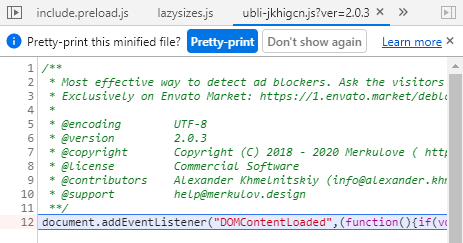 Its comments pretty much told it all: Most effective way to detect ad blockers, so I pulled it out and took a closer look.

It wasn’t hard to find some traits, for example, the following code is a part of it:

The script starts with an event listener:

As I’m not particularly interested in disassembling the whole thing (you can always run it through a formatter to get a better idea of it), I decided to monkey-patch the event listener.

Because the script runs at a rather early stage of page load, I need to do something even faster, so it would be nice to run the “solution script” as soon as the page is “created”. This can be done using Tampermonkey’s @run-on document-start directive:

Now I could write my logic and check what’s being executed. Let’s get document.addEventListener hooked up first:

Looking at the function prototype, it may have up to 4 arguments, so the patched function also needs to have 4:

It’s not a good naming choice, but neither is it a must to have good coding styles here, so I’m going to pass it over here.

As shown by the code, it adds a listener to the DOMContentLoaded event, with its code containing dev tools checker. Knowing that the source code of a function can be retrieved with toString method, I easily composed the following code:

The idea is simple: If something matching the known patterns of the target script, interrupt and deny its code.

The last thing is I need this countermeasure to run on all sites, so the @match directive should be the wildest wildcard:

Now save the userscript and reload the page. I knew that my solution worked as soon as I saw the expected output:

Well done, iBug! You’ve just got another achievement for defeating this plugin!

While ads could be an important income for websites, there are users who detest them. Compelling every single and last user to disable their ad blocker for you is blunt and abusive. If you really want every piece of crummy money from your nasty ads, go fuck yourself.

I’ve uploaded the sample to https://download.ibugone.com/wp-deblocker-2.0.3.js for analysis (run it through VSCode formatter or clang-format first).

Finally, here’s the link to the horrible WordPress plugin, if you want to find out for yourself.